Joe and Pierre have just set off from Bromley. Pierre arrived from Ealing ( 30Km) and had a restorative coffee before they set off for the station. They're taking the train to Charing ( the end point of the "Dry Run") and then cycling to the hotel near the Channel Tunnel. I'm catching the train there later and will see them off tomorrow at 8 a.m. Spirits were high as they left - the extra couple of degrees in temperature this week have helped. 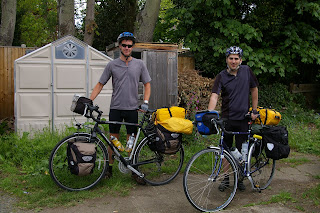 Joe on left, Pierre on right
Posted by Joe's Support Staff at 13:21