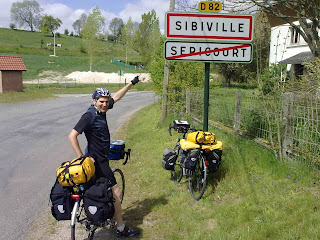 After showering, clearing up and re-packing the bikes, they left Haut Pichot early and headed to a nearby village, Frencq for breakfast. The cafe didn't serve breakfast but directed them to the local boulangerie where they bought some large croissants which they took back to the cafe and ate, washed down with a couple of cups of coffee. The cycling would be further, but a lot less hilly, overall they'd be descending and it was a nice day so they were looking forward to this leg.


They were also looking forward to a good meal and some drink... as Pierre's parents would be in Sibiville! The journey went well and they arrived in the afternoon with the sun shining, as you can see from the picture of Pierre pointing out that they'd arrived!