Today was a day when Joe and Pierre felt like they were travelling flat for the majority of the ride, with only a few steep hills at the end, though they did actually climb gradually throughout the day. It was a hot day, with a slight tail wind on occasions, and sunscreen was an essential. They have brown fingers and faces, with white hands and eye areas as they've been wearing cycling gloves and sunglasses. The good quality, long stretches of road enabled them to get their speed up , turn the legs and the kilometres dropped away. There were wheat and barley fields as well as the ever present rapeseed, and lots of ponds and small lakes. Crickets and frogs were very audible, and Joe and Pierre became accustomed to being croaked at when they passed by. Many of the villages still have their traditional lavoirs where the women of the village used to do the laundry, and many of these too are now populated by frogs.

The roads today were fairly quiet as they were cycling along small back roads, with only a small part of the journey on busier roads. Joe's been struck by the superb quality of the small back roads, which he's found to be smooth and well maintained with very few potholes. Those potholes that he has encountered have been at farm entrances, and have not been particularly deep or dangerous. ( Unlike the potholes near Ashford, where he was encountering 3-4 every 100 yds , many of them serious enough to unseat an unwary cyclist. ) There were some sleeping 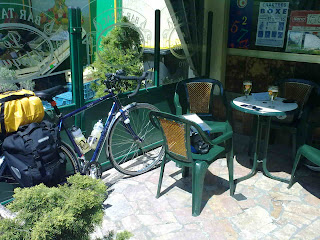 policemen, but the more traditional wide raised french ones.


They successfully found somewhere with an outside area for lunch, though sadly not with a terrasse over the river ( Pierre had optimistically hoped to find one!).

In the villages and towns, the public buildings such as the Mairie/Hotel de Ville/older schools were now made of Tuffeau stone and were immaculately kept. 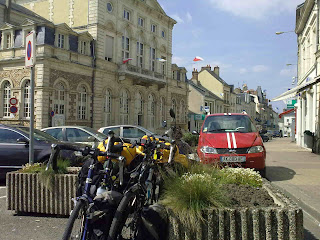 They had originally hoped to camp at the town campsite at Nogent Le Rotrou but when we phoned to book, it was closed for renovations. Another was suggested by the tourist office, some distance outside town but when they cycled to look at it today, it was up a very very steep hill, had no snack bar/restaurant and would have meant a round trip of 20 km of stiff cycling in order to eat tonight. So they opted for a traditional hotel in Nogent le Rotrou ( which was actually my suggested option) next to a bar /brasserie in the centre of the busy bustling town. Again, their bikes were given a safe secure place for the night, in a locked storeroom used by the family.


Joe and Pierre drank a few beers in the bar and then had a traditional french meal including steak frites and a few carafes of cheap red wine. After the pizza and moroccan food of the previous two nights, their meal was solidly french. They headed for bed, leaving the brasserie still busy - more cycling tomorrow.