Just a quick run today over Keston Common.  Only 12km and an easy ride. Quite scenic near the lakes. 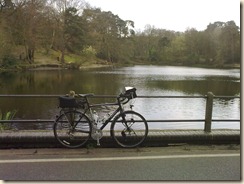 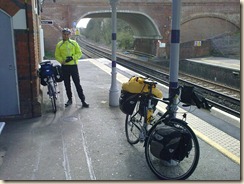 Pierre arrived Bromley around 9:00am so after sorting out bikes etc and a rapid repack by me to try and reduce weight a bit (failed miserably) it was time to go. We left just after 9:30am bound for Ashford (Kent).

The weight of all the camping equipment, clothes etc on my bike (18Kg in total) was a bit weird at first and getting up hills needed a bit of work but things were going well and we were making good progress. I had been nervous about getting up Wrotham Hill but it was easier that I expected. Coffee stop en-route, somewhere on top of a Kent hill was very welcome, picture below. 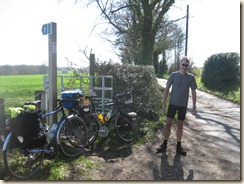 The sun was shining, the Kent countryside was fantastic and we stopped for lunch in a pub (Five Pointed Star : see http://www.beerintheevening.com/pubs/s/31/31429/Five_Pointed_Star/West_Malling ) at West Malling more or less on schedule. A pint (or two) of bitter shandy, a sausage sandwich for me and a Tuna Baguette for Pierre went down really well. In the pictures above and below, my bike is the one with the yellow packs on the back. 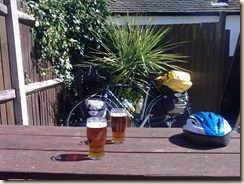 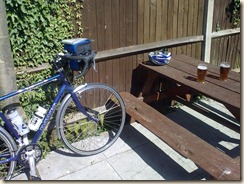 After lunch we were hoping the terrain would flatten out a bit – it didn’t. Hill after hill with the odd down hill bit so steep I needed to go slowly to avoid losing control. Pierre went off at some silly speed – 52km/h was mentioned, but not for me. After about 60km out from the starting point, my legs started to lose power – going on the flat was OK, but going up hills was seriously hard work. Around 80km mark, the printed directions proved to be hard to follow (lots of “local roads”,what ever they are), so resorted to GPS. This took us a bit of a roundabout route up Charing Hill (very steep), then down to the campsite. However, getting to the campsite before dark was the important thing at that point.

Next job was putting up the tents for the first time. Now that we had stopped cycling, it was freezing cold so needed to dig out some warm clothes. Tents were soon up (before dark) and then it was off to the pub (the Wheel Inn at Westwell) for a well earned beer and some dinner. 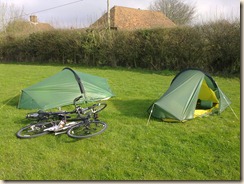 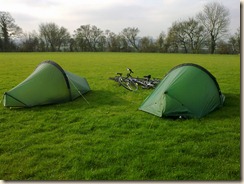 Campsite was a farm with chickens, baby lambs and lots of other animals. Lots of Owls hooting in the evening trees and lots of birds the following morning. Owners of the Campsite were very friendly and amazed we had cycled from London in a day carrying all the camping equipment. Site facilities were reasonable and I reckoned it wasn’t too bad at all. See http://www.ukcampsite.co.uk/sites/reviews.asp?revid=2732 for more info.

Just before we arrived at the campsite, Pierre had some problems with the rear derailleur gear change on his bike. Further investigation for tomorrow.

Spent this afternoon packing kit for “Dry Run” tomorrow.  At least the weather forecast is good so wet weather gear should not be needed.

Having added up all the weight of the  kit, it  came in at 18kg – way too heavy.

Having tried my bike with the 18kg on board, it was seriously heavy and a bit unstable when starting off.  Here’s hoping  It will be OK, bit nervous about all the weight on the bike and the distance we have to cover tomorrow.

Wind blowing a gale, temperature 9C and heavy showers – time for a quick cycle ride.  First trip, 2km (very short) with Guy (a French Friend) to collect a few daffodils.  Second trip 6km with Lorraine to look at a Chateau at Jarze – dark and forbidding, won’t go back there again.  Only just got back before the heavens opened.

Doing a 165km round trip over two days on 10th, 11th April – now getting scared as have not done anywhere enough training.

Looked out the window this morning and the sky was dark, the wind was howling and the rain was pelting down – perfect me thinks for a test of my wet weather gear.  So after a lunch of Steak Frites and a glass (or two) or red wine, it was off to cycling.  By now the sun had come out and the wind had dropped and it was quite a nice day.  Even so,  Lorraine (a friend) and I set off for a short cycle run with a planned stop at a local bar.  Well the bar was closed and on the way back, dark clouds appeared,  hail stones followed by heavy rain started to fall and the wind got up.  Lorraine got soaked but my wet weather gear seemed to work and I got back reasonably dry.  So a tick in the box for the wet weather kit.