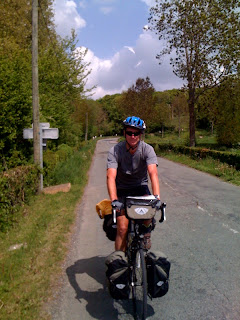 Having arrived in sunshine the previous evening, they had pitched their tents in the shade so not to be woken by the sun in the morning - but it was a cold night and their tents got moist and didn't dry out when the sun came up ! So they spread them out to dry and headed off for breakfast in Poix de Picardie before packing up the (still moist) tents and leaving the campsite and friendly staff.

The previous day was a day of Eoliens as they passed very close to a number of wind farms. This was a day of living creatures - they were chased and barked at by dogs, followed by a cow ( thankfully behind a fence ), investigated by curious horses and heard birdsong and creatures rustling when they rode through the forests. It was also a day of less steep, longer climbs topped by a view and then a long descent again. Joe achieved a downhill speed of 49 km/h ( had he looked at the dial he would have peddled a bit faster!) and Pierre overtook a tractor cutting grass!

It was a day of lovely picture postcard scenes - beautifully kept Normandy villages, with wood and wattle houses, straight spired churches and stunning countryside. A day of dirt tracks and fragrant woods, animals...and "reverse sleeping policemen" - ie signs, but there were hollows in the road rather than humps! It was also a day when they found somewhere to get lunch ( though they did have supplies this time in their saddlebags, just in case). The lunch in question for Joe was a culinary first for him - Hamburger Raclette Cheese Toasted Panini! - and gave some much needed energy. They even managed a quick panache in the afternoon ( well, you didn't expect them to have tea and scones?).


They're building up suntans (or windtans?) and although the clear skies clouded over and there were rain showers around , they didn't get wet. They cycled on wet roads and passed cars coming the other way with wipers still going but managed to dodge the showers. It's also getting warmer!


They arrived at Chaumont en Vexin where they were booked into a hotel as campsites in the area were scarce . The hotel doesn't currently have a bar or restaurant ( an application for a change of license has been submitted ) but the owner took pity on them and kindly offered to drive them to a local restaurant or said that they could bring a take-away pizza back to the hotel. They decided on the pizza and some cans from the pizza shop and ate back at the hotel, where they'd been given plates, cutlery, napkins etc, and a dining room to eat in. Imagine that in England? 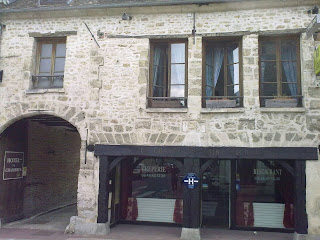 For the first time on the trip, when they arrived at the stopping point, they felt that they could have gone on further that day...