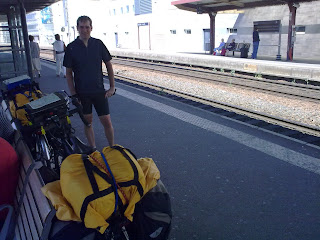 Early start as the train at Angers Station wouldn't wait and they couldn't risk missing it. The cycle ride would take a few hours and they had to allow time to mend a puncture. The run was a good one and they made very good time - they were drinking a cafe creme at the Cafe de la Gare Angers at 10.30, in plenty of time for the train ( see pic of Pierre with bikes on the platform).
Staff at the station were very helpful, and bike-friendly. There was a dedicated space on the train for bikes - clearly signed as such - but maybe the party of french women who boarded just before Joe and Pierre couldn't read french? They stacked their luggage into the space for the bikes (ignoring the compartment for luggage) and so Pierre and Joe had to load their bikes in front of the women's cases. When the train stopped at Charles de Gaulle airport the women were peeved to see the bikes there and had to move them in order to reach their bags. Joe would have helped them - but the scowling women were blocking his path so he left them to it.
Once they arrived at Lille Europe, their next hurdle was to see if they could take their bikes back to St Pancras on the same Eurostar train as themselves! When booking the tickets back in the UK, Rail Europe had booked the bikes onto the SNCF train from Angers to Lille Europe, but said that we would have to take the tickets up to Eurostar at St Pancras to book the bikes on. (The original plan had been to change at Paris for Eurostar, but Rail Europe had told us that it wasn't possible to book bikes onto the SNCF trains from Angers to Paris.) When we went to St Pancras, finding the correct office was challenging, and then the man told us that he couldn't book bikes on Eurostar trains from Lille, only from Paris and Brussels! Apparently they don't have the staff there... So he said that all he could do was put a note on the system ( which no-one would read) and Joe and Pierre would have to try their best on the day.

If the bikes couldn't come on the same train, Joe and Pierre could not change their train without incurring huge costs and as the bikes were valuable, for them to be sent unaccompanied afterwards was a worry (and they would have to carry all their panniers and tents with them). With this in mind, Pierre's father Dave had kindly driven to Lille from Sibiville to make sure that all was ok, and assist by taking the bikes with him to Sibiville if it was impossible to take them back.

At first the answer was "no, not on this train" - but they could come on the next train. Joe then asked if they could move their seats to the next train - again the answer was "non" - unless they bought new tickets. They persisted however, explaining the position to the very helpful SNCF lady who tried very hard to presude her computer to do as they had asked, and eventually after getting assistance from a colleague, the computer printed out two bike tickets for their train at 30 Euros each. Dave in meantime had ascertained that new tickets for Joe and Pierre for the next train would have been 250 Euros as they were " on the day"! After a celebratory beer, Dave then left and it was time for Eurostar security with the bikes..

Despite the fact that the bikes were bigger than the machines, the security people insisted that the bikes be put onto the belt, with all luggage removed and the seats put down. First to go was Pierre's bike - which still didn't fit - and in the process, his handlebars were damaged and will need to be repaired. As the frame is metal, all that would have shown on the screen was the metal anyway so it was a pointless exercise. Joe's bike, being bigger , wouldn't go onto the belt at all.

Then it was onto Eurostar and home for the bikes was the guard's van and so to London. After leaving St Pancras, the two cycled to Marble Arch and then Pierre headed home for Ealing and Joe headed for Victoria Station and a train to Bromley. They'd made it! Joe's bike programme said 701 km (and Pierre's would be more, having cycled 30 km to Bromley at the start, and then from Marble Arch to Ealing at the end).

Another one is on the cards at some point in the future - but not travelling with a bike on Eurostar from Lille Europe!
Posted by Joe's Support Staff at 13:44