A day of contrasts - and a long one. One target today was to cross the Seine on the smallest road possible ( not so small unfortunately) and stop at the other side for lunch. The duo spent some time the previous night trying to minimise the pain of crossing the Seine - it had to be done, and it was going to be grim , so a longer route was chosen to avoid the bigger roads.


The day started with them cycling up and down valleys, with long sweeping S bends cutting a swathe through forests and beautiful countryside. As they neared the Seine the architecture changed, with timber houses giving way to stone cottages. ( Unlike drivers, cyclists have time to notice these things).


Joe elected to walk up a couple of the steeper hills and both Pierre and Joe walked up one which deteriorated at the top, became a dirt road and then turned into off-road riding for a km. A wrong turn probably, but one that two fellow cyclists also made. They followed the same route for a while - two dutchmen ( possibly retired) who were en route to Compostela in Spain, but whether they were on a pilgrimage or not wasn't revealed.


There were other cyclists on the road today, and bonjours and smiles were exchanged as they passed each other. Locals were friendly - waving and smiling and offering directions. Even car drivers seemed more considerate, allowing space, and Joe and Pierre enjoyed zooming down the S bends, Joe reckoning that he was going a sensible 30-35 km at that point.

Then at the base of the descent to seal level to cross the Seine, it all changed. The road chosen, at Gargenville, a D road, was chock full of lorries, all of whom seemed intent on making life difficult at the very least. The road was two lorrys wide - and yes, there were lorries constantly in both lanes. Joe was nearly crushed by two lorries and on seeing his wheel being squashed into the kerb, had to do an emergency stop and dive onto the footpath. He crossed the rest of the way walking on the footpath. Pierre however elected to cycle in the middle of the road, trusting that the lorries would not steamroller over him - and it worked! 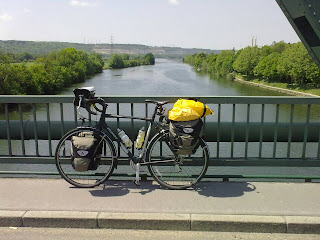 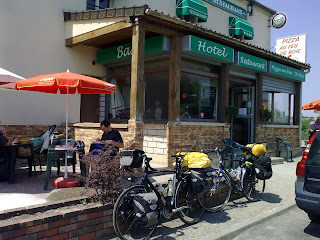 Sarnies and a panache at a pizza place helped replenish the pair, but then they had to cross a series of busy roads and motorway links, with broken glass, murderous lorry drivers and smelly traffic fumes - all in all a very unpleasant 4 or 5 km, and they felt they were taking their lives in their hands.

Then it was onto small side roads and they were ascending away from the Seine again.It was now mainly tiny back roads to their destination. At the top of the valley, the sound of the countryside seemed to be different to that north of the Seine - in addition to the birds, there were now crickets and frogs, and Joe saw lizards scurrying away at the side of the roads.


More lovely villages, and then they finally reached their destination. No thoughts of being able to go further today - they were more than ready to stop. Their hotel was at the top of a hill at the edge of town , so it was a walk into the village downhill for food and then a climb back up the hill to bed. Dinner was Moroccan and was apparently superb - Lamb Tagine, Mixed Couscous, Beers ( there was a choice of restaurants, but moroccan won out over crepes!). Happily, after the long ride, even the bikes had their own quarters ! 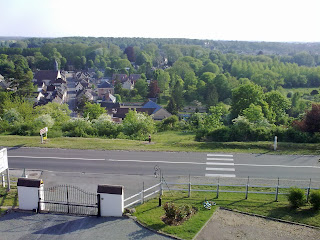 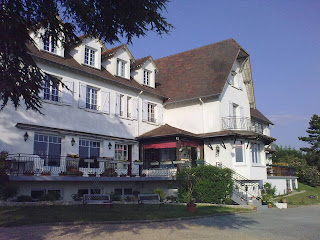