Another 75 km day, but this time back to climbing again, with a rural campsite the stopping place. They made a good start and good headway, but despite looking for many hours, they could find nowhere to eat. There were bars ( mostly smoke filled, in defiance of France's anti-smoking laws!) but no food was available. This was a real concern for them today, as they're burning lots of calories and need fuel ! It's one of the disadvantages of following a route on the minor roads - it's more pleasant to cycle on the small roads, and less lorries should make it safer, but no lorry drivers eating means no cafes serving food. Still they made it to the campsite late this afternoon and have plans to stock up with sandwich ingredients from the local shop for tomorrow. Pierre was pleased to arrive - as can be seen from the picture below! Next step was to check in and pitch their tents, which were small so wouldn't take long! Another steep climb today - the campsite is, according to Joe, " at the top of the world" but they've pitched their tents and headed off for a well deserved meal and no doubt a beer or two. 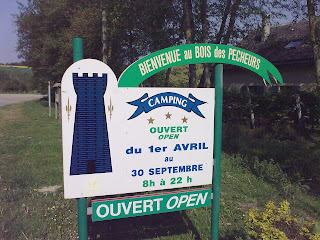 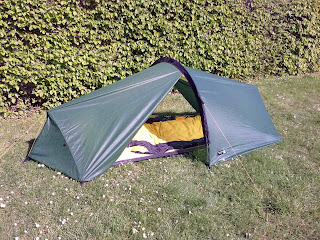