Setting off at 9.30 am, it was another v hot day. They got lost and ended up on an N road which had been renamed as a D road as part of the changes to the french road network and responsibilities. The additional traffic was not what they expected!

For much of the day, they followed the river Huisne, though this , unusually for a river, appeared to go up and down, so it wasn't a completely flat ride. Overall though the GPS showed it as a net downhill journey. 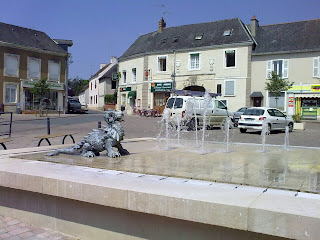 Overall, it was a fairly easy day and it was the first day that Joe didn't walk up any hills. It was just as well the going was reasonable though, as it was very hot throughout, and even in evening at 8pm the pharmarcie display was reading 26 degrees. At times, Joe was gasping for air.

The lizards were loving the weather, and Joe saw lots of them sunbathing and then scurring away from the roadside as they rode by.

They arrived at Yvre L'Eveque at around 3.30 and headed for the campsite and cold beers! Once the tents were up, Joe headed for a swim - this was a 4* campsite, with good facilities. Joe and Pierre were lucky to get in, as this weekend is the weekend of the Moto Grand Prix at nearby Le Mans and accommodation was full throughout the area. When booking, we begged and pleaded for a small space for the night ( their tents are very small, and the bikes take little space ) and 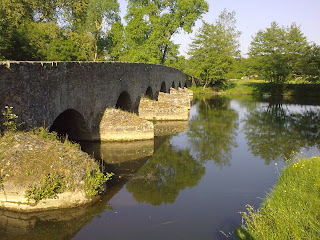 the campsite were very kind and gave them one.

The campsite is in the back of this picture, to the right of the roman bridge from which it takes its name, le pont romain. Having explored the town, and found that yet again, there were no restaurants or bars , they headed back to the campsite's snack bar and fuelled up on sausage and chips and more beer. Then they discovered that the campsite was selling ice cold Rose de Loire wine for 3 Euros 50 Cents....... Having taken their disposable plastic glasses from the hotel the night before ( my usual ploy, as you never know when you'll need them!) they poured themselves some glasses and settled down for a pleasant evening. As did the big group of french motor cyclists who were canped nearby. The campsite started the evening with 30 bottles of ice cold rose and sold them all. Joe and Pierre accounted for 3 of them ( see photo below of Pierre) - well it had been a very thirsty ride! And then to bed. 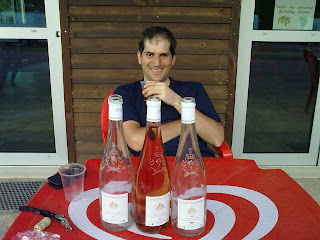